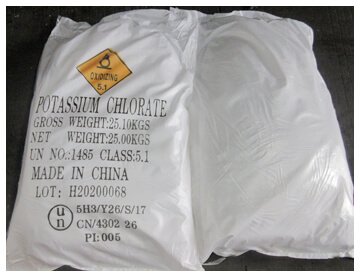 We offer potassium Chlorate from a warehouse at the favorable prices with delivery throughout Russia.

The table of Solubility in water at an appropriate temperature:

Under the action of acids cleaves explosive chlorine dioxide, in the presence of which many organic materials self-ignite. One of the most active oxidizers in pyrotechnics. It has a low decomposition temperature, compositions based on it have low ignition temperatures. In its pure form can explode from a very strong impact, but does not detonate from the blasting cap No6.

Decomposition catalysts are manganese dioxide, potassium bichromate, copper oxides. It is not compatible with ammonium salts, since in the presence of moisture a low-stable ammonium chlorate is formed, which is prone to self-ignition (in the USA such compositions are prohibited by law). In a mixture with phosphorus in a dry form explodes even with minimal compression. It is not recommended to use potassium chlorate together with metals such as magnesium and aluminum because of the high sensitivity and activity of such mixtures. It is impossible to allow rubbing of structures on its basis in a dry kind. Care should be taken when mixing with sulfur-containing substances. Was first obtained in 1786 Bertolli

Potassium chlorate is used for the production of matches, fireworks, explosives, dyes, solution as an antiseptic in medicine.

Back call
Our manager will contact you in the near future.